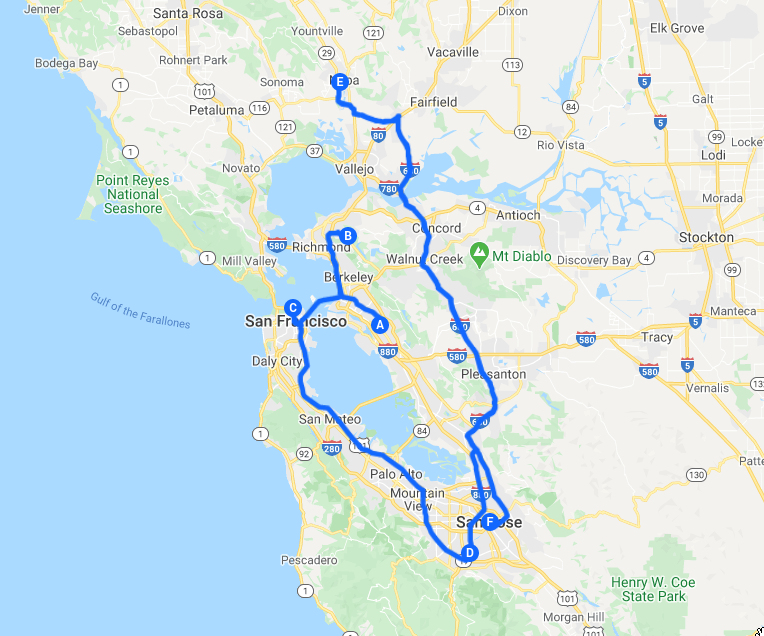 Source: A brief tour of the places I've stayed during quarantine.
If you tilt your head to the left, it looks vaguely like a poorly drawn dog.
Yes, I do have too much time on my hands.

For most folks, the past few months have likely looked a lot different than usual. Humans are creatures of habit, and spending 99% of your time stuck at home represents a pretty thorough disruption of those habits for many. As a person who was used to spending more like 0.02% of my waking hours at "home", things have certainly looked different for me. It feels like an eternity ago that I was gearing up for a life without the truck, gathering my few possessions up and picking places to stay.

The Truck Folk: Where are they now?

Well, it's been three months (or maybe four?),* and in that time I've attempted to self-isolate in six or so separate spots around the Bay, each successive stay being longer as quarantine carried on. Having spent four and a half years living in a truck, I expected some growing pains. All things considered though, adjusting to the various changes in my day-to-day was surprisingly easy.

But then again, I guess my lifestyle is pretty conducive to self-isolating when I think about it; my favorite pastimes (reading/writing**, programming, exercising, etc) require zero human interaction. This isn't entirely by design, but it isn't exactly by chance either. Through that lens, not much has changed and my smooth transition to normal-apartment-living-human makes sense. As a Normal Apartment-Living Human™ (NAH, for short), I've gone on plenty of hikes, sampled a few Napa wines, and broken a few personal records on some recent bike rides.

While not particularly impressive, I think this is the biggest biking climb I've ever done.
Picture courtesy of Ride With GPS and OpenStreetMap

Oh, and I bought another house. 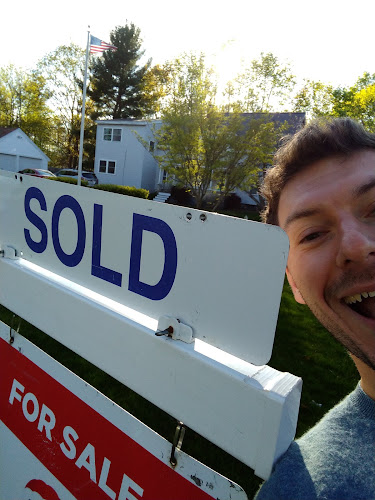 Far from my most flattering picture, and I'm really not one for selfies, but I couldn't resist.

I don't want to get into the nitty gritties this time around, but it's a similar arrangement as the first one, still in the Boston area, and quite lovely. Pandemics and geography naturally introduced some logistical challenges, but in the end, T's were dotted, I's were crossed, and things were generally squared away. 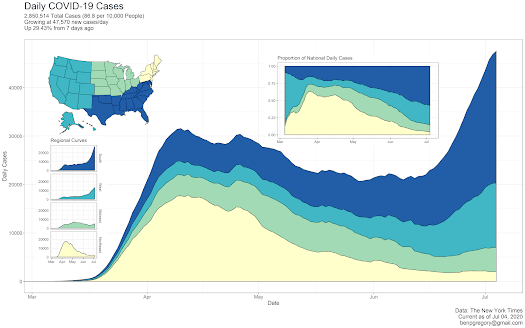 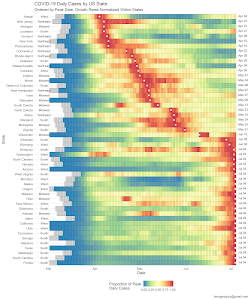 First graph from Reddit, second graph from the same author, also on Reddit
Underlying data from The New York Times

For better or worse (and the graphs/data tend to suggest 'worse'), it looks like my life might return to some level of normalcy in the near future. "For better" because I'm not a huge fan of Airbnb-hopping, as nice as exploring various parks and hikes around the Bay has been, and I miss my truck. "For worse" because it seems batshit insane that anyone should be trying to return to some level of normalcy, given the effect that appears to be having.

And yet, that's the direction things are trending. I got an email from Santa Clara County (summarized here) a few days ago that said, among other things, gyms are going to be allowed to re-open shortly. That's great for yours truly, who's been shedding weight and strength in the absence of things to pick up and put down, but I would expect gyms to be literally the last thing to open. I can't think of a single place where more sweaty humans take turns touching the same set of objects, aside from perhaps a McDonald's PlayPlace.

Back in the Saddle?

PlayPlace-related digressions aside: my repeated change of scenery hasn't been lost on my eagle-eyed co-workers, who seem to immediately pick up on the changes in lighting and the rotating backdrops of windows, paintings, and other riffraff on my video feed. My excuse has been that I'm hopping around because I don't feel productive working from my primary residence. This is more or less true…if you squint a little bit…and take a fairly liberal definition of 'primary residence'. One of those conversational half-truths I'm so fond of.

And speaking of work: my employer is starting to (slowly) phase people back into the office. Priority is for the scientists and hardware engineers, who need access to special, usually expensive, and usually immobile machinery, labs, and doodads, then the software engineers. I fall into the latter category, and appear to be slotted in the first wave of pixel-pushers heading back into the office. This seems to be at least in part because I've mentioned my reluctance to work from my actual home.

And on this, I am conflicted (though clearly not enough to actually do anything about it). Am I taking that spot in the 'first wave' from someone who legitimately has trouble working from home, perhaps for reasons other than the self-imposed and truckly ones that I have? Or have most tech folk settled into a rhythm at home and are happy to avoid the commute?

And further, is it even remotely reasonable of me to be going back to a (public or employer-provided) gym? Even if I'm taking sensible precautions, am I not participating in the same kind of needlessly (and decidedly not-sensible) social behavior that's been causing the latest (and frankly, massive) spike in cases? Between wearing a mask, wiping down equipment before and after I use it, monitoring my own health, and generally not licking other gym-goers, I'm likely not all that much of a risk, but it still feels decidedly meh.

Who knows though, if cases continue trending in the same direction, companies and counties might slow down their re-opening efforts. If so, I'll continue my circuitous shuffling around the Bay (and my strength training-deficient workout routine).

What have I learned?

All in all, the experience has been an interesting one. "Interesting" is one of those words that doesn't actually mean anything without context though, so allow me to elaborate on that. I've long talked about how I don't plan on living in the truck forever, so I think this was a good reset to see how I feel about the truck. And after a few months of easy access to bathrooms and electricity, I think I've found my answer: I want more truck time.

Don't get me wrong, living in real abodes has been quite nice. I've re-discovered my love (not to be confused with knack) for cooking, where cooking is just a fancy way of saying "dousing vegetables in garlic-scented avocado oil and setting them on fire, then adding eggs". I've re-learned how to live with other humans, which is always a useful skill to have. And nobody has tried to watch me sleep either (as far as I know), which is always a plus.

But the experience has also reminded me of some of the reasons I liked the truck so much to begin with. The truck added a level of regimentation to my schedule that I've struggled to replicate with willpower alone. The frequency and duration of my exercise hasn't been nearly on par without the strong motivator of being forced to travel to a gym to shower. Also, cleaning the truck was always an absolute breeze. I'd throw on some music and get to sweeping. Barely a song would pass before I was all done. Real homes just have, I don't know…crevices. Everywhere. There's just always another thing to clean.

Anyway, that's all I got for now. I've got a bunch of half-finished (and hopefully shorter) posts I'd like to publish at some point in the near future, but you know how these things go. Stay safe, and stay home.***

*Hard to keep track, since time doesn't appear to be real anymore.

**Though I clearly haven't been doing much writing as of late.

***Unless you're in a place that has its act together and virus spread is no longer an issue, in which case do whatever you want.