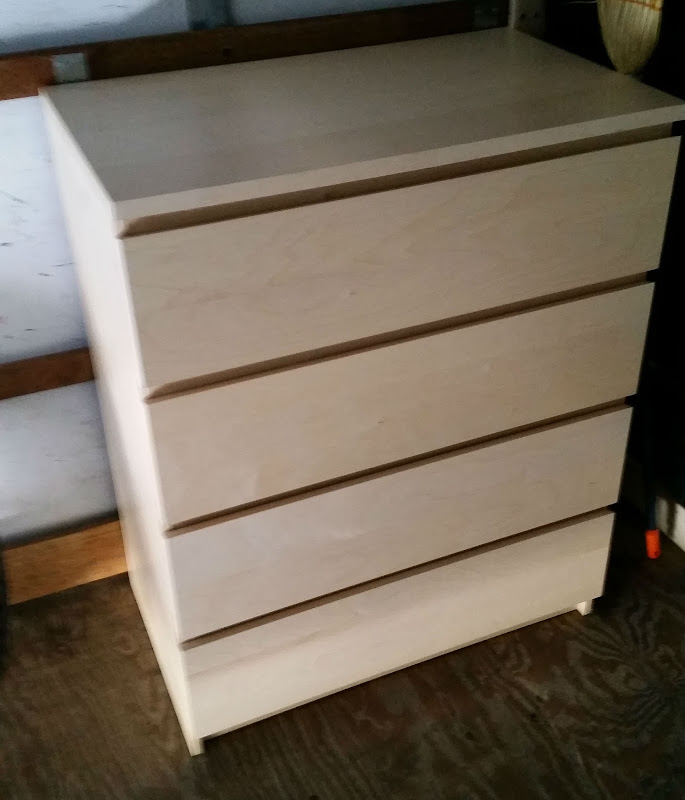 Look at that stupid thing. With its silly little drawers and its wooden frame. Pfft.

In reality, it's just a simple four drawer dresser from Ikea, which I definitely needed because I've been living out of a suitcase my mother lent me, and I need to return it eventually. This project was my first two-day project, and in total took me about six hours to complete. Nothing went horribly wrong per se, it's just that Ikea is Satan incarnate, as it turns out. As you can probably tell from my demeanor, I've never assembled anything from Ikea before, but I figured for something as simple as a dresser, it couldn't be that bad.

Before I even made it into the store, I had to maneuver my unwieldy box truck through the massive fields of tightly packed parking lots. After two unsuccessful laps around, I opted to park across the street. This would turn out to be a Grave MistakeTM. Once I finished my box truck slalom session and parked, I found that "Ikea" is Swedish for "Labyrinth". Okay, so maybe not literally, but it really might as well be. I went in knowing exactly what I wanted, and if I had been more well-versed in the art of Ikea, I might have headed straight to the "Self Serve" section of the store. But alas, I'm new to this whole process, and found myself waist-deep in screaming toddlers and strollers as I waded my way through the "Showroom" section of the store. Despite moving at nearly a jogging pace for the entire time I was in the store, it still took me about 15 minutes to make it through all of the twists and turns of the Showroom. I'm not sure if that is a testament to how slowly I jog, or just how massive Ikea stores are. Once I made it to the Self Serve area, I loaded up my un-assembled dresser onto my cart, checked out, and wheeled it down to the parking lot. This part of the process would have been the smoothest, if I hadn't parked across the street. As soon as I wheeled my cart outside the store, the wheels locked up, and unceremoniously tossed my box to the ground. Tragic. Huffing and puffing, I carried the large, awkward, hundred pound box the quarter mile across multiple major intersections back to where I had parked. Sweating profusely, I unlocked the back and tossed the package in.

Bringing it to Life

As I spend more time with the truck, I realize more and more that people really have better things to do than worry about what the crazy box truck guy is doing. As a result, I had no problem ripping open boxes and hammering things together in the back of the truck, parked in the middle of a Nordstrom's parking lot at 7 PM on a Saturday.

This is the part where I realize that assembling the dresser is literally a 24 step process, with 10 different types of screws, nails, and bolts, and nothing but pictures to serve as instructions. I do my best, and make it as far as getting the frame together before I realize that the height of the dresser doesn't line up with the wooden railings, and I have no way of securing it. Exhausted, and mildly discouraged, I wrap some rope around it to hold it in place, and head home for the night.

After sleeping on my predicament from the previous day, I came up with a solution. Can you guess where it took me? That's right, right back to Home Depot. I measured out the space between the two wooden railings, the same space that lined up with the dresser's mounting bracket. I went into Home Depot, had some wood cut, and picked up a few brackets. Twenty screws, four brackets, and two planks of wood later, I had jury-rigged my own mount to attach the dresser to. I spent the rest of my time in the Home Depot parking lot assembling the draws, securing everything, and unpacking the suitcase.

The final product is pictured above, and though I'm happy with the result, I can't help but have a bit of disdain for the thing because of the amount of raw effort that it took to get here. I added one final touch, which was securing the draws closed with adhesive Velcro strips, because I don't want to dump all of my belongings on the ground every time I take a sharp turn.

The place is starting to come together. It's clean, organized, and has everything I need. I'm ready for the long haul.