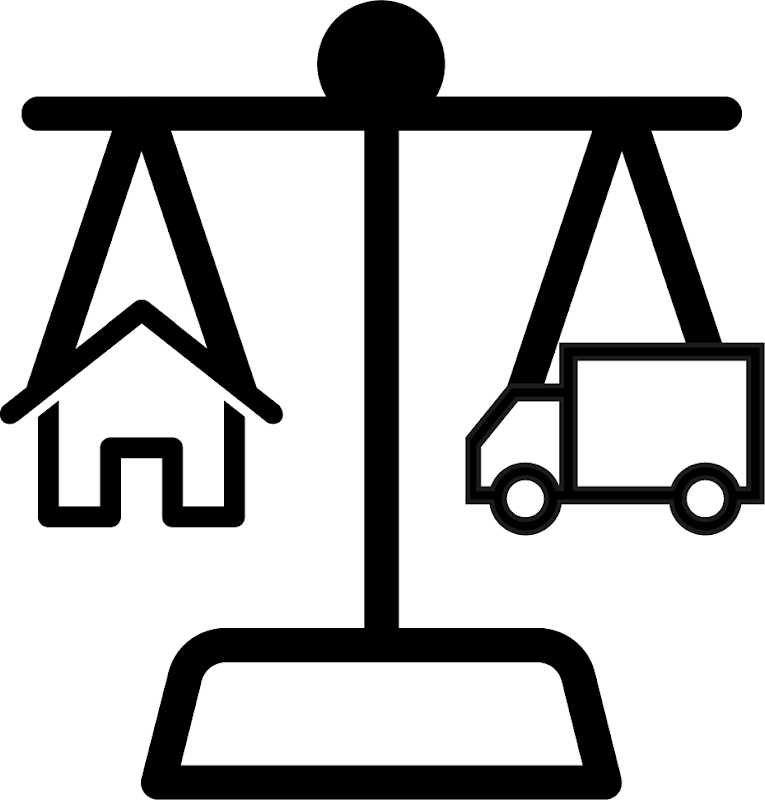 Source: Perfectly balanced, as all things should be.
I have no idea what this is supposed to be/represent, I just kept image search-ing random words until I found a few icons I liked.

ho·me·o·sta·sis (/ˌhōmēəˈstāsəs/) - the tendency toward a relatively stable equilibrium between interdependent elements, especially as maintained by physiological processes.

Recently, I've been more or less MIA, distracted by work trips, holidays, good books, and my random assortment of novelty website side projects.* Anyway, I figured this is as good a time as any for a general status update on the state of truck-related things. I'll try to avoid straying into retrospective/reflection territory, as I've already done enough of that last year, but no promises.

I'm a creature of habit. I like a healthy amount of structure in my life, and I have a routine that provides it. Even my spontaneity is usually structured; I set aside the same rough time frame every weekend to do something new and hopefully weird. Whether or not that's really sad is up for debate.

With that in mind, it's probably no surprise that my crowning truck achievement is how little has changed recently. It took me the better part of two years to figure out a winning formula for what I want out of the truck (and in it), but my setup has stayed largely the same since I threw out everything and bought new stuff, which was nearly a year and a half ago. In other words, I think I've reached Truck Homeostasis™**.

Truck Homeostasis looks something like the following: a small sunroof for ventilation, an interior door for security and slightly less sketchy ingress + egress, a giant storage cabinet (and associated organization system), and a raised bed frame for putting shoes and a few select items that don't fit in the storage cabinet. 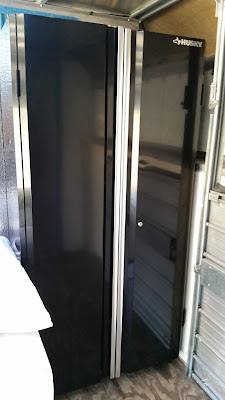 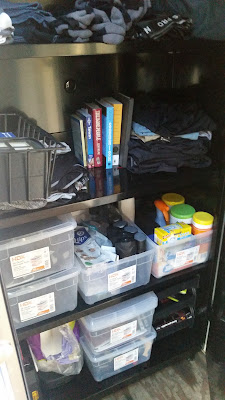 Oh look, it's the vast majority of everything I own.

In recent memory, things have been pretty boring, but like, in a no-news-is-good-news kinda way. I've settled into my role as The Homeless Homeowner™, rolling with the ebbs and flows of mortgage payments and home repairs, and everything is on the right level of auto-pilot. As a result, there's really only a few vaguely noteworthy events worth rambling about, which is what I'll spend the rest of this post doing.

An unfortunate side effect of being alive is consuming stuff, and sometimes that stuff hangs out for longer than you'd like. A pair of hiking shoes here, a sexy mermaid costume there, and on occasion, a birthday gift you don't quite have the heart to reject. Over time, even with the most diligent of cruft-control efforts, you end up with stuff you don't necessarily need. Luckily, the truck has no problem reminding me when I have too much stuff, just by virtue of being small.

This time around though, I noticed that not only did I have more things than I cared to, but more specifically I had duplicates of a lot of really random things. Like, for example, backpacks.

There are a few things I'm a total sucker for: good headphones, good notebooks/pencils/pens, and good backpacks. There's nothing like having a solid organizational system for schlepping around all of your garbage, which is extra important to me because I spend most of my time at places that aren't my "house". And one size doesn't always fit all, the system I use for carting around a full workday's worth of gym clothes, work clothes, and laptop(s) doesn't make a ton of sense for a long bike ride, which also doesn't make sense for organizing multi-week trips. Try to optimize for too many situations, and eventually you end up with this. 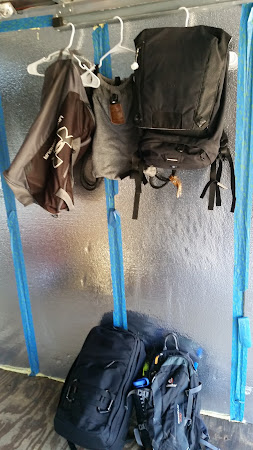 Five, count 'em, five different bags. From top-left, clockwise: one duffle for traveling, one steal-proof drawstring sack from a KickStarter, one everyday backpack gifted by my employer, one lightweight bag for hiking, and one for, well, everything else. Comprehensive? Yes. Entirely necessary? Not a chance.

That said, sometimes it's just plain hard to get rid of things. At some point in the past, I wholeheartedly believed I needed each one of these bags, despite knowing full well that having five bags is a bit silly. I managed to convince myself that I could get by with three, and I bit the proverbial bullet and donated the other two. I'll leave it as an exercise to the reader to figure out which bags I thought were superfluous and which were necessary.

Product area number two where I was seeing double (or triple, in this case): novelty outfits.

I wouldn't describe my wardrobe as "colorful" or "interesting" or "good". I wear a lot of black and grey and otherwise uninspired colors, mostly because I own like a week-and-a-half's worth of clothes, and I don't want them to be too memorable, lest people recognize how weirdly limited my outfit rotation is. If we're being honest here, the more adventurous parts of my wardrobe are all past years' Christmas gifts from my (Jewish) mother, who actually has a surprisingly well-tuned sense for men's fashion.

Boring wardrobe aside, I also own a few outfits reserved for special occasions. Not 'special' like weddings or white-tie affairs, more like Bay to Breakers or Halloween or the odd Ugly Sweater party. 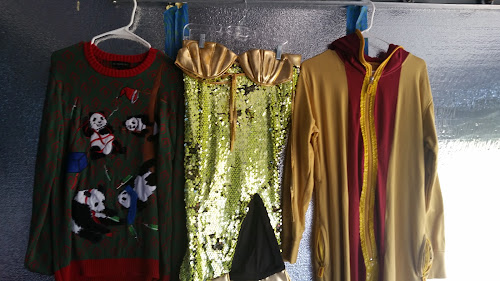 Again, three novelty items here is looking a little crowded. The ugly sweater I got because I love pandas (in all their derpy glory), and wanted to be an active participant in each winter's barrage of Ugly Sweater parties. I also wear it once or twice in the middle of summer, just to make sure it doesn't get too lonely. The hotdog costume is reserved for races and onesie parties, and I bought the mermaid costume a few Halloweens ago as a protest against a good friend always having the flashiest costume. Personally, I like to think I did it justice. 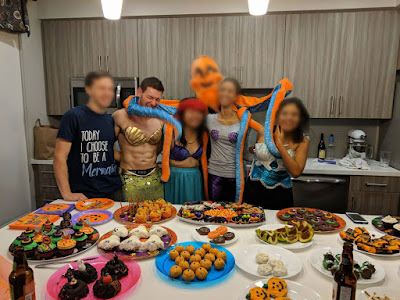 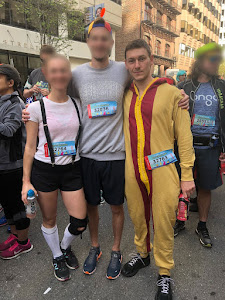 Bringing back the BlurryFace™ treatment to showcase the more fringe items in my Seasonal Collection. Yes, I blurred out the octopus face.

In the end, I couldn't bring myself to actually get rid of any of these. They're all uniquely suited to a different subset of festive occasions, not to mention I haven't yet gotten my money's worth out of the mermaid costume. I have however resolved to not acquire any more pieces of novelty attire, if that counts for anything.

I had too many jackets. 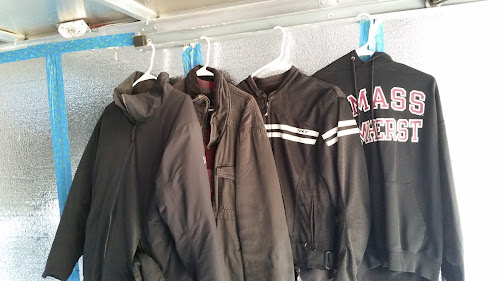 This one was easy. I think I've semi-successfully navigated my quarter-life crisis, so I donated the motorcycle jacket and the college sweatshirt. I still own a "UMass" shirt in case I ever need to pretend I'm a college student.

That concludes our tour through my closet/general winter cleaning efforts. Let's talk about vaguely noteworthy event #2.

This was originally supposed to be the section of this post where I congratulated myself on not having any pest-related problems for over three years. Unfortunately that's an accolade I no longer get to give myself, because I recently came back to the truck and made the following mental observation:

"Huh, why does the floor look like it's moving? Weird."

This thought was immediately followed by an overwhelming sinking feeling and a sense of impending doom, as I realized my floor had been replaced (quite suddenly, might I add) with an entire army of tiny ants. I really cannot overstate how thoroughly they covered the floor, their intricate crisscrossing paths like the factory floor of a giant warehouse or sorting facility. Like, if I had a dollar for every tiny ant on the floor of the truck, I'd probably have bought a house in San Francisco that night.

Luckily (and perhaps unfortunately), this wasn't entirely unfamiliar territory for me: I have an entire arsenal of critter-killing cocktails that I keep in a small (and hopefully well-sealed) plastic bin in my storage cabinet. Given that there were ants coming and going every which way, I couldn't really tell where they were coming from (if it was indeed only one location), so I opened up my plastic death bin and liberally placed ant traps all around the truck. The saving grace (and reason I could sleep at all that night) is that the ants seemed content to stay on the floor; they weren't crawling up the walls or (**deep internal shudder**) on my bed.

What was particularly perplexing to me is that I had no idea what drew the ants to the truck. I keep literally nothing edible in the truck for exactly this reason. My best guess is that there was something about the wooden floor, perhaps something edible kicked up onto the underside of it. The onslaught came hot on the heels of the first (or maybe second?) rain of the season, so maybe that had something to do with it?

In any case, when I came back the next night, things were in much better shape, and the invasion was limited to a few hotspots along the walls. So I swept out a horrifyingly large dust cloud of dead ant debris, ripped out the insulation around the hotspots, did some more sweeping, then sealed the areas where the floor meets the walls with a heavy-duty construction adhesive, which I probably should have done years ago.

The infestation seems to be contained (knock on wood), as I haven't seen any ants in the past week or so, but I'll probably rip out the rest of the insulation and seal the rest of the floor just to prevent it from happening again.

And that's about it, the current state of truck affairs all accounted for. Oh, and happy New Year! This obviously wasn't a New Year-related post, but that's probably fine. As my next order of business, I plan on catching up on my long-neglected blog email inbox.

*I haven't actually bothered to check this, but I'd be willing to bet that my output of blog posts trends downwards during the later months of the year, because I usually spend all of my free time August-December building a Christmas game/website for my hometown friends, where they fight for a varying number of inappropriately sized cash prizes. Past years' games have included clones of Cards Against Humanity, Texas Hold 'Em, Bomberman, Bananagrams, and Tetris.