Obvious Facts About Box Trucks #1: They Don't Have Bathrooms 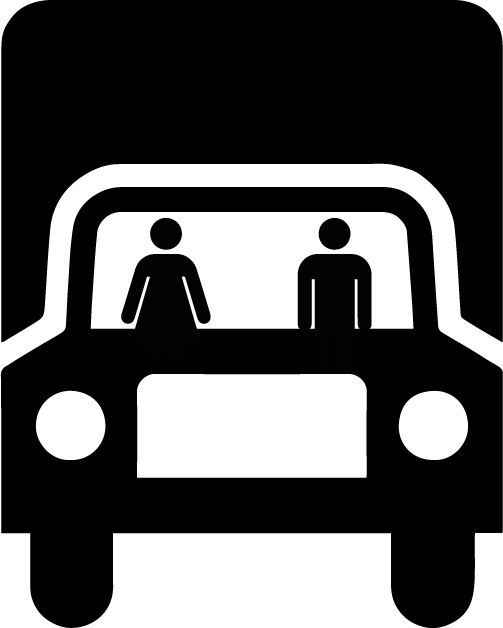 I feel like it's been a while since I started a new series of posts. Sure, we've got Truck Tech and Home Improvement and Tips from the Truck and Q & A, but I'm pretty confident we have room for at least one more. If titles weren't supposed to be short, I'd probably extend the series name to: Incredibly Obvious Facts About Box Trucks (And Their Implications), just so we're all definitely on the same page. Anyway, these posts will be all about inherent properties of box trucks, and what that means for how I structure and live my life. Our first patently obvious fact about box trucks: they definitely don't have bathrooms.

To illustrate the above obvious fact, here's a recent* picture of the box. 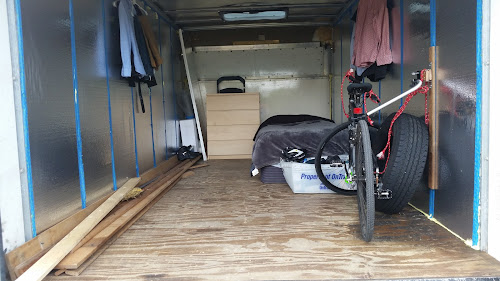 Not a single bathroom in sight.

Box trucks are well-suited to a wide range of activities. Need to make an area more sketchy? Park a box truck there and watch the surrounding property values plummet.** Worried you don't own enough things covered in graffiti? Buy a box truck, they're magnets for impromptu community art sessions. Got some stuff to move? I know seven satisfied customers who can testify that Brandon's Ad Hoc Moving Service™ comes in handy on occasion. Box trucks are great for hauling crap around…just not in the literal sense.

Which brings us back to the (decidedly unglamorous) topic at hand: my home of choice doesn't have a bathroom. But what does that mean? Well, I've already talked at length (arguably too much) about the implications of not having a nearby bathroom, so we'll gloss over that part. Basically, it's not a huge deal because I'm never in the truck except when I'm sleeping. It does change how I think about bathrooms though. It's not a room in my house where I keep my hygiene-related stuff. For me, it's any place where I can get myself ready for starting or ending a day. This is what my bathroom looks like: 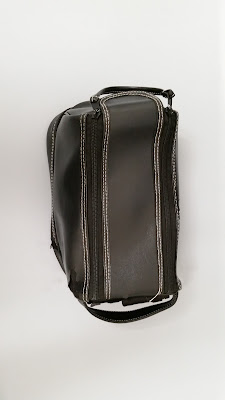 Sure, there's no marble countertops or glass walls, but it gets the job done.

Or from a few other (equally unflattering) angles. 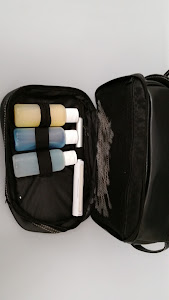 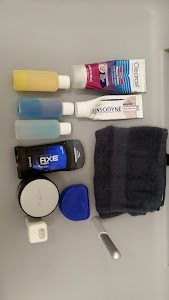 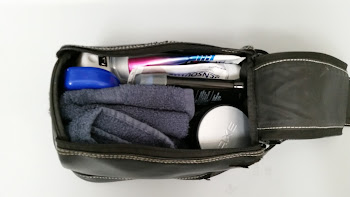 I own more Axe® products than a prepubescent boy preparing for his first date.
For the record, I'm neither of those things.

Uh Brandon, I know you're slowly losing your mind and all, but that's definitely a travel bag…not a bathroom.

Why not both? That bag has everything I need to not look/smell*** like I live in a truck, just add water. And really, it's hardly any less convenient than a personal bathroom would be. In fact, it's definitely got a few perks. For one, normal bathrooms are hands-down the worst part of a house to clean. Aside from the general uncleanliness that pervades bathrooms by their very nature, they also have that whole Portal to Hell™-area going on behind the toilet. When was the last time anyone willing stared into that abyss? Never. Seriously, that place is a straight-up war zone, with different gangs of bacteria and mold-like creatures fighting for turf. There are more unclassified species back there than in the Amazon. I'm downright joyful that I don't have to fight that battle.

That's not to say I'm just pawning off cleaning and making it someone else's problem though. I'm an ardent subscriber of the whole "Leave things better than you found them" philosophy, and always make sure to clean up after myself and then some. For example, and I'll never understand this, but for some reason people love to strew their gym towels haphazardly around the locker room on Friday nights. When I come in on Saturday morning, it looks like a washing machine projectile vomited all over the place. Or like a bomb went off in the laundry bin. In any case, I'll usually take a few of them and toss them in the actual towel receptacle (a mere three feet away) on my way out the door. It's certainly not the most heroic act ever committed, but it stops me from feeling like my questionable life choices are to the detriment of others.

The only (incredibly minor) downside is that no bathroom means no mirror, meaning the first time I see my ugly mug is after I've subjected everyone else to it at the gym. When I stroll into the gym with Beyoncé blaring, I quite literally "woke up like this".

*I've gotten rid of the wood, extra insulation, and tire since I took this photo. I also built the previously pictured coat rack for my shirts.

**Unfortunately, this doesn't work in the Bay Area.

***I don't know if the truck has a scent or not. If it does, it's certainly not the one I want to smell like.