Q&A #8: Cleaning Out The Closet 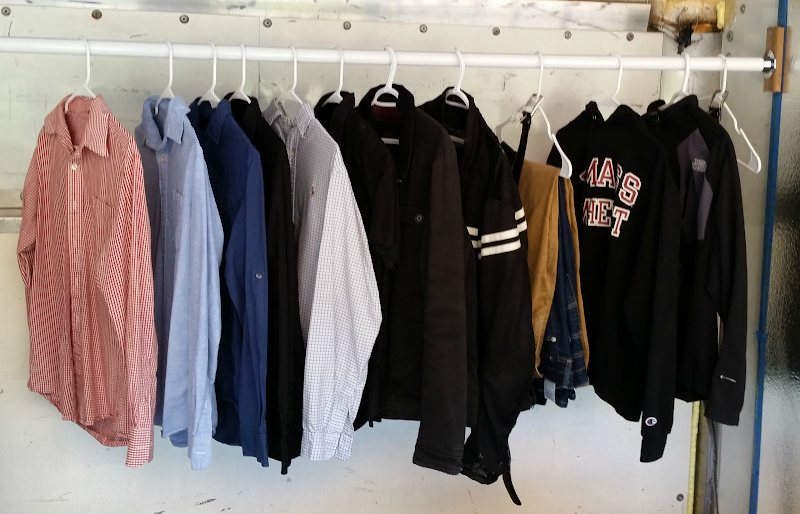 Source: My actual "closet", aka a pipe bolted across the back of the truck. And it only took me 6 months to finish.

It's that time again, when I realize that I've been neglecting people's questions for too long and they've reached a critical mass. It's time to clean out the closet. Not the literal one pictured above, though I should probably do a write up for how I threw that together too.

I just read your leather strap solution to your drawer problem. Have you considered magnets?

Indeed I had, and in fact I use some neodymium magnets to hold a makeshift screen onto my sunroof. I decided against using magnets on the dresser drawers because of their force characteristics. Basically, I didn't like the idea that I'd have to Goldilocks my way to the right strength of magnet: too weak and the drawers do as they please when I take turns, too strong and they become difficult to open, not to mention they might rip the super glue off instead of simply separating. Snaps and straps are much easier to reason about: I snap them closed and the drawers don't move, I unsnap them and I can get at my clothes freely, without a fight.

That would be an interesting project. Get a little solar panel, a Raspberry Pi or Arduino, temperature sensor, and cell modem, and POST some data to the site every few minutes. I mean, I'm not going to actually do it, but I agree, it'd be interesting. How about a pretty good approximation though? The box truck may very well be an oven during the day, but I'm only ever in it at night, and the truck has basically zero functional insulation. At night, the temperature outside is the temperature inside, with maybe a degree or two difference, so checking the weather in South Bay will let you know how the box is doin'. To keep warm in "winter", I usually just pull a blanket or two over and that does the trick. I put winter in quotes because, as someone from a place with actual seasons, what happens in the Bay Area hardly qualifies.

You know, I really can't remember. I don't think so. Every six months when I go to renew my private mailbox, I swipe my card and that's usually the end of it. When I initially got the mailbox, there were definitely things to read and papers to sign, but I don't think I had to verify any other addresses, just provide a previous one.

You've talked about retiring and retiring early, so clearly the future is on your mind. Are you considering having a family ever/are your calculations based on providing for you alone?

This is a great question, even though the future is scary and I act like a small child. My ramblings at the end of this post explain it more thoroughly, but my strategy for the future is just to create as many opportunities for myself now, so that when the time comes to make Serious Adult Decisions™ (or SAD, for short), I have the flexibility to do what I want. You're right, my early retirement math gets a lot easier when it's just me, but I'm also not naïve enough to think that I know what I'll be like ten years from now. Do I want kids? Who knows. No doubt, there's certainly something attractive about the idea of tiny genetic hybrids of you and someone you think is awesome. That said, I'm fortunate enough to have the luxury of not needing to decide if that's what I want right now. One thing I'll say is that if I did "settle down", I highly doubt future-me would accept the traditional way of doing it. I'm not saying there'd be trucks involved, but there'd definitely still be a whole lot of travelling and something resembling retirement.

Can you please elude to your eating habits? Do you have a small kitchen, grill, mini fridge in the box? Are you going out to eat more often? Lastly, monthly food expense (approx), thanks!

The truck has zero kitchens, grills, and/or mini-fridges. In fact, the truck has zero anythings that aren't beds and/or dressers. I eat three square meals a day at work, and I go out on the weekends. I spend $50-75 a weekend on food, so probably ~$300/month. My diet consists of copious amounts of chicken, with some veggies thrown in for decoration.

Any plans to fix up the inside, like removing the garage door and putting in a wall with a camper-style door…or anything for the walls? It's looking pretty grim in there, man.

I've considered putting in drywall or replacing the rear gate, but I invariably end up asking myself the same question: why? Let's be honest with ourselves here, no amount of drywall or renovation is going to make up for the fact that it's a sketchy old moving van. I can put a new coat of paint on it, I can redo the floors in beautifully-finished hardwood, I can hang up paintings—you get the idea, but it'll still be the same truck. Something something lipstick on a pig. I chose the truck because I was indifferent to appearances and all I needed was a bed and a place to store my clothes. Everything else is superfluous. If I cared about how grim it looked or what people thought of it, it's unlikely I'd have ever gotten a truck (or even an RV) in the first place. The truck serves its function and it serves it well, so it's hard to justify putting in the money, time, and effort to make any "improvements" which do nothing to make me a happier, healthier person.

I very briefly looked into it after my unceremonious (but not unexpected or unwarranted) eviction. The conclusion I came to is that no RV park would want me and my MacGyver'd shanty. As it stands, the truck doesn't have much in common with an RV: it doesn't have electricity, water, or the hookups to provide them. Even if a particularly open-minded RV park was willing to take me under their wing, it'd likely be a non-zero distance from my work, negating all of my nice commuting benefits.

And that's all for this episode of Questions and Answers. As always, keep the questions, curiosities, and whatever else crosses your consciousness coming.