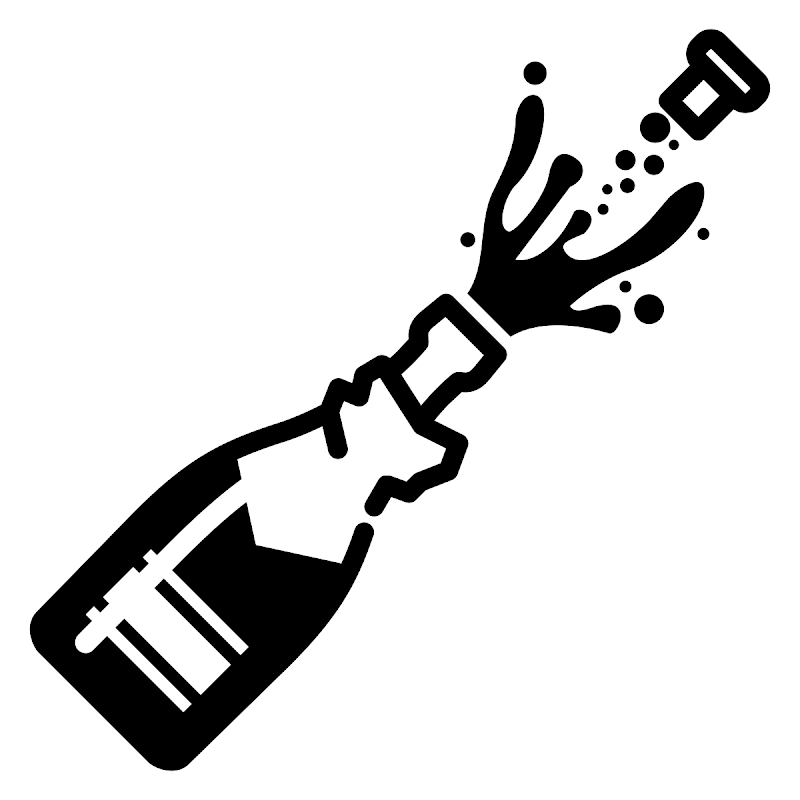 Source: Originally, I was going to use a picture of a 2018 Ford E350 box truck, but then I decided that was dumb. Plus, the black and white graphics look cleaner and load faster.

This may not be my first post of 2018 (or even my second, for that matter), but hey, better late than never.

I've said before that I'm not a big fan of New Years' resolutions. That's still true. But I am a fan of taking the time to evaluate how my life is going, and course-correcting as necessary. I try to do it every few months, but the start of a year is as good a time as any to take a good hard look in the mirror, so let's do it.

I feel like it'd be cheating to just say, "yeah, I think things are going well", and call it a year. I think it's important to figure out what it means for things to be good, and that's going to be different for everyone. For me, things are good when some combination of the following things (in no particular order) are true:

With some criteria in mind, let's break it down and see if things are, indeed, good.

2017 was a good year for learning new things. I learned how to snowboard (badly), do stand-up comedy (poorly), and dance like Beyoncé (abysmally). And no, I will not post videos of me doing any of those things, but here are some pictures (except for the Beyoncé dance class, because I don't need that kind of blackmail material out on the open internet): 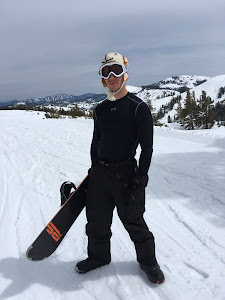 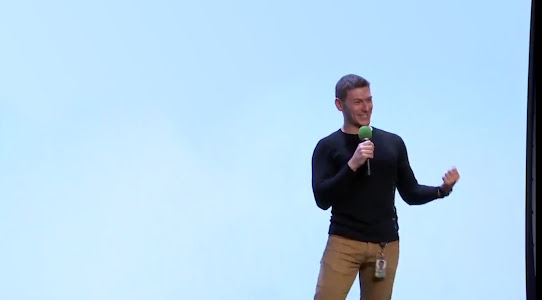 Not pictured: (left) me involuntarily headbutting the mountain, and (right) a stone-faced audience cringing in silent, abject horror as I laugh hysterically at my own bad jokes.

I'm a big fan of doing things ever-so-slightly outside my comfort zone, because I think that's where the real learning and growing happens. And that's pretty much how I ended up in comedy and dance classes, by taking double-dog dares from my friends.

Outside of half-assing new skills, I spent some time full-assing a few existing skills. I bought a Kindle and read more books than in past years, and learned about different areas of computing, like how to correctly use Docker, properly deploy stuff on Google Cloud Platform, write games in Unity, and build modern single-page applications (which I mentioned recently). I'm hoping they'll prove useful in future endeavors.

If you search the blog for the word "cardio", pretty much all of the references are talking about how bad I am at it. Growing up, my doctor said I had "sports-induced asthma", which is fancy doctorspeak for saying I was "exceptionally unathletic". I'm happy to report I do real cardio now…for various values of "real". I ran my first 5k in November, at an 8:25 pace. Yes, I did spend a few minutes at the finish line dry heaving, but we can definitely gloss over that detail.

I don't have any pictures, because the company who did the marathon photos wanted like $20 for a digital download, which is downright thievery. Like, I understand you need to maintain the site and set up the cameras and win contracts, but why on earth would I shell out $20 for a high-resolution print of myself on the verge of tossing my cookies?

As for heavy objects, my ability to pick them up and put them down actually declined in 2017. Like, January Brandon would beat December Brandon in a whole gamut of strength-related activities, and probably a fight, if for some reason it came down to that. I cut meat out of my diet early last year, and even though I was being careful with my macronutrients, I still lost somewhere between 15%-20% of my overall strength while my body adjusted (I used to subsist almost exclusively on chicken, for better or worse). I also did a lot of travelling in the first half of the year, which means I wasn't as consistent with my routine. I've gotten most of my strength back, and I'm also a few pounds lighter, so my Wilks Coefficient has probably improved, but there's still plenty of work to be done if I ever want to hit my combined lift (squat, bench, deadlift) goal of 1,000 pounds.

One would think that this should be the easiest goal to quantify, since it's inherently numerical. The problem is that I've always struggled to find a good dollar amount for my target "nest egg", the amount of money where I'd feel comfortable quitting my job (if I wanted to). The generic target people throw around is a million dollars, because it's a nice round number, and if you're using a 4% safe withdrawal rate (discussion), $40k a year is perfectly livable in many parts of the country that aren't San Francisco.

And sure, we can use $1 million for a rough estimate, but at some point I have to answer some real questions to figure out if that's right or not. Questions like, "do I want kids?" and "how does a significant other fit into my life?" have a huge impact on how much money I should set aside, and how large of a safety margin I need. In the past, I've given a non-answer about keeping my finances flexible and doors open, but that's really just a nicely-phrased cop-out. The older I get, the less useful that answer becomes, which is something I learned the hard way unfortunately. I'm sure I'll address it all in a future post, but for now, we'll use $1 million as our target.

When I moved out to California in May 2015, I had $0. And when I say $0, I mean $0. Like, "strategically skipping meals" broke. It was definitely a rough week or two before I had started work and received my first paycheck.

As far as financial independence goes, those numbers are heading in the right direction. I saved 50% more in 2017 than in the year and a half before. Granted, those savings are on the back of a very bullish market, which I don't expect to last forever. It'd be unwise of me to try and extrapolate the next few years based on the strong growth of the previous few years. Still, it's not unreasonable to think I could reach our example target in five more years without any crazy cost-cutting on my part.*

A graph of my total invested balance over the past twelve months, courtesy of Vanguard.

My biggest expense this year will likely be travel. I don't really travel for work anymore, since I changed jobs. I'm hoping I can pull together a few personal trips this year, and visit some of the places I've been reading about.

Getting My Beauty Sleep

I'm a big proponent of sleeping, and sleeping well at that. It's been a while since I've talked about tracking my sleep quality, but I've still been recording data for the past few years through the same Android app.

Originally, I wanted to write about how my sleep quality has changed over time. I figured out how to export the data (all ~47,000 data points!), but it's been a massive struggle to parse it into an analyzable format, and then to properly visualize it. Because this post is already almost a month late, I'm going to give up trying to process the data for now.

In short: I have no idea how well I slept in 2017, but I'll do a follow-up post once I figure out how to sift through the data.

Even if everything in my life was moving along swimmingly, it would be a pretty hollow success if my family and friends weren't doing so hot.

Recently, one of my friends was mistaken for someone else at a bar and legitimately attacked by a very belligerent, very drunk woman. He's fine though, and I'm sure it will be a hilarious story at some point in the future, probably after the gash in his face heals up. Freak bar attacks aside, everyone in my life is doing pretty swell, which makes me happy. Don't really think I need to elaborate on this one.

I don't want this post to be a self-congratulatory shrine to how awesome I think I am. Reading it over though, that's kind of what it's devolved to. Sure, I'm proud of what I accomplished in 2017, but there's still a lot of room for improvement.

For starters, I got physically weaker, I dropped the ball on some personal relationships, and (in more ways than one) I wasn't as focused as I want to be. I think it's because I've gotten too used to my routine. It makes sense: I've found a good, consistent routine and I like it. The problem is that I get comfortable with it, which takes the edge off the sense of purpose and urgency that usually motivate me. It's hard to sustain that energy when you're doing the same thing over and over.

And that takes a tangible toll. I've noticed I'm less enthusiastic about my workouts, I'll drag my feet and miss sets or even entire days. My passive attention to personal relationships hasn't been enough to keep them healthy, and I've noticed I oscillated idly between projects, making little progress on any of them. Ironically, it looks a lot like the problem I thought the truck would save me from, because I thought the truck was too obnoxious to get comfortable with.

To explain it another way, it feels kind of like that Adam Sandler movie Click. For those who (wisely) stay away from Adam Sandler films, the gist is that a dude gets a magical remote, and one of the things it allows him to do is fast-forward through "uninteresting" parts of his life. While he's able to eventually fast-forward to his goal, he spends most of his life on auto-pilot and everything kind of falls apart as a result.

I said that 2017 was about investing, and it was. I invested in myself and the truck, and it's paid off: I'm closer to my financial goals and not massively stressed out when it rains.

So what's 2018 about then? I'd say finding focus and being present. I've got the routine down and the investments are paying dividends, but I need to get off auto-pilot. I need stay mindful of why I do what I do. I need to be more in the moment. I need to take a more active role in the things I do every day.

But I don't know how to do those things yet. Maybe the solution is to take more deep breaths and dedicate some time each day to just existing. Maybe I'll have to introduce some dynamism into the routine to keep me motivated. I'm not sure. But I know that the work I put in now sets the course for the rest of my life. And if that's not motivation enough, I don't know what is.


Here's to 2018, and to achieving anything you set out to do, whether it takes a day or fifty years.


*One could argue that living in a truck is a "crazy cost-cutting" measure, but at this point it's a pretty foundational part of how I live, and it doesn't feel like a sacrifice. ¯\_(ツ)_/¯