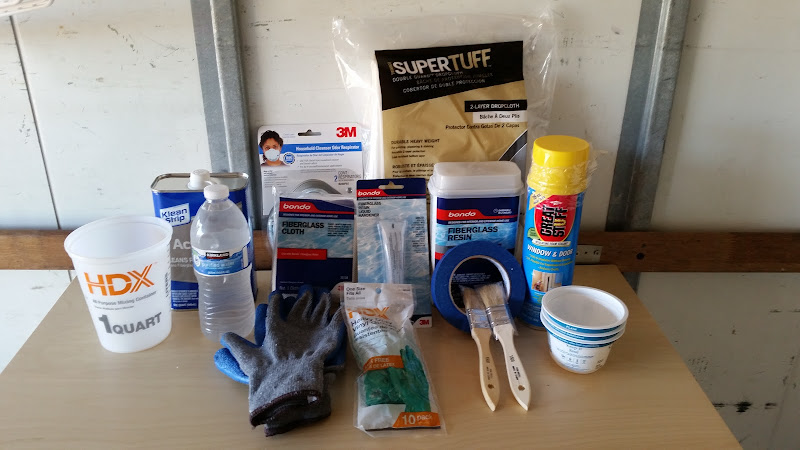 It's been long enough.

I took my sweet time getting around to actually doing it, and then almost another month on top of that to start writing this post about it, but we're here now.* And that's what really matters, right?

So anyway, you might remember "The Hole" from that time that birds always insisted on pecking at it, or that other time that I MacGyver'd a drainage solution to avoid waking up in a truck-shaped rainwater swimming pool. Looking back, I had every intention of paying another human being money to fix this particular problem. That all changed once I received an email from Nancy (over at PK Safety), who, like BoscoBob before her, knows way more about fixing my problems than I do.

Nancy was kind enough to give me step-by-step directions on how to apply a sturdy smattering of fiberglass mat/resin to the tragically maligned hole, directions she curated and perfected from her experience fixing/consistently-being-in-close-proximity-to boats. "If this treatment is good enough for boats, which have to withstand waves and constant interaction with salt water," I thought to myself in a conveniently blog post-ready format, "it's sure as hell good enough for protecting my truck from a few gentle raindrops."

As you can see from the picture above, this wasn't a small undertaking. Quite the opposite, this was hands down the largest project I've attempted thus far. And as a person who's never considered themselves "handy", "useful with tools", "remotely adroit at anything that requires common sense", or "likely to survive attempted usage of industrial chemicals", this was sure to be a demanding (and educational) experience. With Nancy's instructions in hand, I biked off to, you guessed it, Home Depot, a company so integral to my truckly lifestyle that I should probably double down and buy stock in it. On my short list of things to buy:

Nancy's list of Hole-fixing ingredients also included things like "sand paper" and "primer" and "rollers", which I dutifully ignored because it looked like their collective purpose was to make everything look prim and proper, which isn't of any particular interest to the dude who lives in a borderline leprotic van still covered in several-year-old graffiti.

I had everything I needed to do this thing, I just had to put the rubber to the (literal?) road. I woke up early on a beautiful and crisp Saturday morning, drove to a nice remote area, and threw open the back gate, both for ventilation and sunlight. 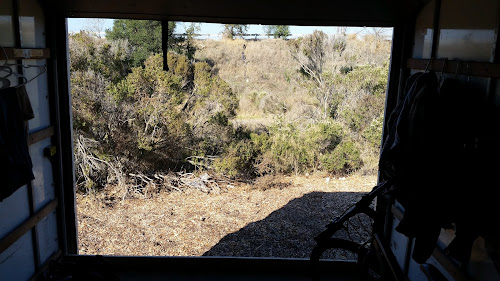 The view from my work site.

The first step was to survey the area and plan out how I was going to handle it. There was a chunk of fiberglass missing on the right edge, and there were a bunch of cracks that extended about a foot beyond that. I had bought more than enough to do the whole area over, so I put some acetone on a paper towel and cleaned down everything extending a few inches beyond the cracks. The idea is that the acetone removes anything that would prevent a good bond from forming. 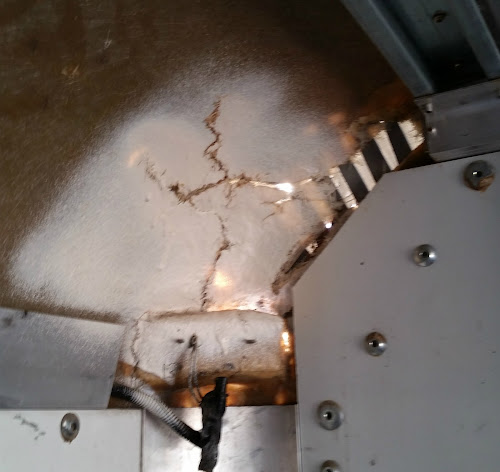 One last piece of setup: I tossed the disposable drop cloth out below the soon-to-be affected area, and taped it to the wall with the painter's tape. Before whipping out the rest of my meth lab essentials, I threw on a pair of gloves and one of the face masks. 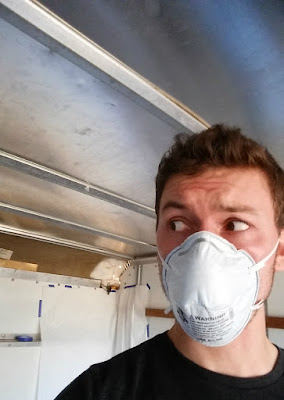 Casting sideward glances to intimidate and confuse The Hole is also a recommended, but optional, step. *insert a good Bane impression here*

Anything more than very basic instructions leave me befuddled and deterred, so I was grateful that the fiberglass resin and hardener had simple ratios to mix together: a certain number of drops of hardener per cup of resin. The trick is that you only have 10-15 minutes of time to spread the mixture once you mix them, then they harden up and become a sad unusable cement. That's why I had been binging on Chobanis®, I needed multiple cups for multiple small batches. So I poured a small quantity of the molasses-like resin into my plastic measuring cup, and then counted out the corresponding number of hardener drops into one of my re-purposed yogurt cups. After pouring the two components into the same container, I frantically looked around for the stirring sticks I had completely forgotten to purchase. Luckily, the wood chips on the ground just outside the truck made for great improvised stirring sticks. From there, it was just a matter of painting a thin layer of epoxy, ripping a piece of fiberglass cloth off, dabbing it all down with a little more epoxy, and then repeating the whole process again, layer after layer. I put down around 20 pieces of the fiberglass cloth in total over the course of my three batches of epoxy, with each piece roughly half the size of a sheet of paper. 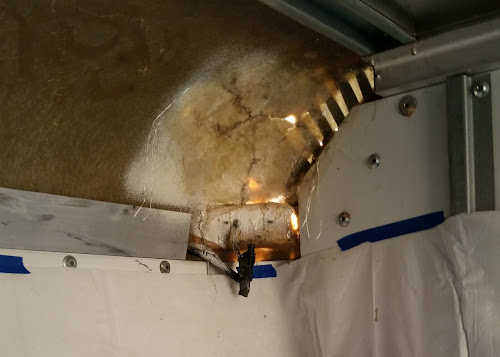 The end result (before drying). It doesn't actually look any better in this picture, but I can assure you that it's all one solid piece now.

To finish up, I threw all the leftover, unsalvageable, half-used ingredients onto the drop cloth, which I then rolled into a little ball and tossed into a giant garbage container belonging to a nearby construction site. I then left the truck-patch to cure (and vent some of the brain-cell-killing chemicals away) for the rest of the day, opting to go on a nice long bike ride and coding from a cafe a few towns over.

Is It Holding Up?

If you go back and look at my first two Home Improvement projects, you'll see that I did a terrifically shoddy job on them and had to immediately turn around and repair them. Luckily, that doesn't seem to be the case this time around. Nancy's instructions worked wonderfully, and the bond still appears sturdy as ever. One pretty big issue is that I didn't totally fix my leaking problem. I still have a pretty consistent drip from the metal area to the top right of where The Hole was, and I have to do a bit more research as to where it's coming from before El Niño turns my truck terrarium into an aquatic abode.

The idea behind Great Stuff® is pretty simple. You shake the can, you spray it into the cracks, it expands a bit, and it provides a little extra insulation. I thought this would be a great addition to the area around The (now defunct) Hole, and just the back of the truck in general, which is a bit drafty. But I forgot to take into account how bad my basic motor skills are, and how much the stuff expands, and I kind of just coated seemingly random bits of the truck in it. It legitimately looks like Shrek had a vicious cold and was sneezing huge mucus-y webs of lumpy sadness everywhere. 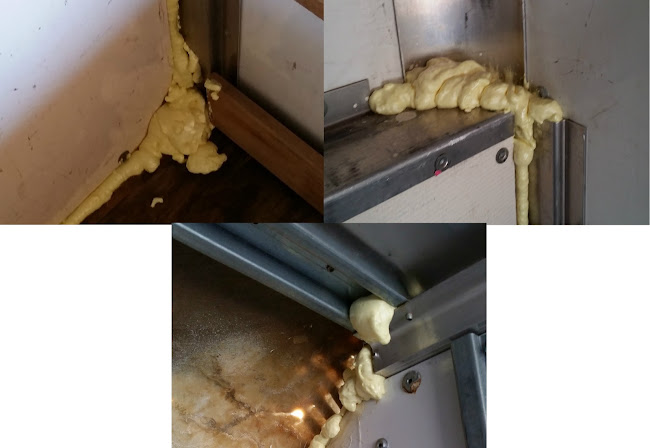 A collage of my ceaseless stupidity.

The icing on the cake is that the only way to remove the stuff, per the instructions, is "mechanically". Meaning I have to physically rip this stuff free from everything that I've attached it to if I want to redo it properly, which I'd like to do at some point. Like I said before, if nothing else, this project was very, very educational. And while I don't know when any of this information will ever come in handy again, it's certainly helping me towards (wrongly?) believing I can undertake larger and more ambitious projects in the future and maybe have them not fail entirely/spectacularly. I guess we'll see.

*I was really waiting until I had finished adding the functionality to put multiple pictures in a post, which as you can tell, totally exists now.