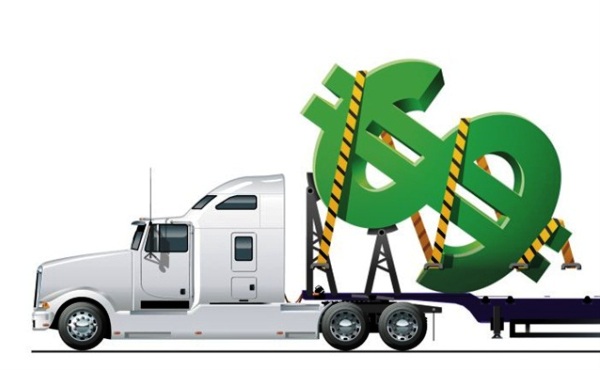 I gave my spiel about such lightweight topics as money, financial planning, and how I plan to live the rest of my ephemeral human life. Naturally people had some questions and thoughts of their own to contribute, and I'm more than happy to bring those into the mix.

Any reason you're using an ETF instead of a mutual fund? I don't see the soundness in the incurring fees on a brokerage account.

So I mentioned I'm using Vanguard for my brokerage account, and (as of now) my investments are in VOO. If you look at this handy chart here and included below for good measure, there are no commissions or fees as long as you're trading Vanguard funds/ETFs. 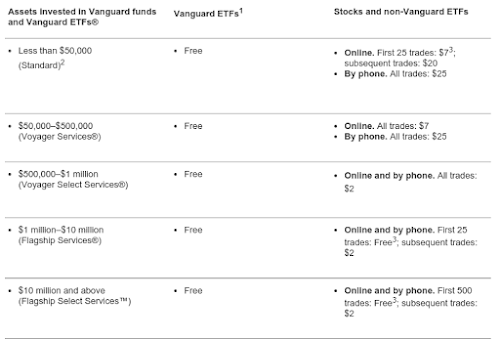 So between that, and the generally higher expense ratios for actively-managed mutual funds, Vanguard ETFs seem like the better option for me right now. But I'm also the first one to admit that I'm still very actively learning about all this stuff, and I appreciate any and all advice people have to offer.

I hope [...] you're not actually going to invest all of you "investment money" in that one ETF.

I probably didn't make this clear enough in my money post, but I won't be blindly dumping all my money into the one ETF. While it is diversified, it is still all my money being susceptible to the fluctuations of a single fund. I don't have enough money in my brokerage account to worry about it yet, but I will start picking out other types of funds to invest in once I'm putting serious cash (>$100k) into it . In the mean time, my 401k and HSA are invested in funds that are at the very least not identical to VOO, and 10% of my 401k (which has 10x more money in it than my brokerage account) is invested in bonds, so I'm not putting all my eggs into one basket by any means. I'll likely never pick out my own stocks, but I'll certainly branch out once I have some time to research what my options are. In the mean time, my current mix provides a nice balance of risk/reward.

Appreciate you sharing the numbers. What percentage are you spending/saving?

This is a tricky one to answer because my spending hasn't been consistent in the slightest. When I was first getting the truck setup, I was really making it rain on my expenses. Between getting truck-work done, and buying beds, dressers, bikes, clothes, and all the other bare necessities, my weekly spending was easily 10x what it is now. Six months into it, I think I have every large object covered. I can't think of anything I could buy that would make my life better in any meaningful way, and more likely than not, it'd just take up my precious and relatively scarce truck space. All that considered, it's much easier for me to hit my target savings rate (~90%) now as compared to six months ago. My biweekly take-home pay is $1,640.89 (as of now), and I have monthly truck insurance of $70, a music streaming membership for $10, a GitHub account for $7, and a DigitalOcean server for $5. That leaves me about $60 a week for random leisure spending, which is more than enough for a nice dinner, some drinks, and hanging out at a quiet cafe and typing up blog posts. It'll be easier to consistently hit the target when my income goes up in the New Year (raises, changes to 401k/HSA, etc).

How much are you spending on fuel?

Not much, especially since I learned I can keep my insurance cheap by driving less than 3,000 miles a year. Sometimes I'll go two weeks or so without driving, and then I'll drive it just to make sure it hasn't died on me/the tires aren't warping. The last time I drove it any significant distance was to help a friend move, and that was about 50 miles round trip. I probably drive, on average, 50 miles a month, so like $15 in gas a month. My bike and a sprinkle of public transportation serve me well for pretty much all the travelling I do in the area.

Back in the good ole college days (like six months ago), I was the proud owner of a 1986 Corvette, which had roughly the same fuel efficiency as my truck, but would probably make a much less comfortable home. Despite costing me a fortune in fuel, insurance, and repairs, I'm glad to have had it: at least I was able to get most of the crazy, testosterone-loaded joyrides out of my system before entering the real world. It's strange to think I went from one extreme (loud, gas guzzling, male compensation machine) to the other extreme (long quiet scenic leg-powered bike rides) in such a short time. Hell, Last Year Brandon™ would have painted the front fender a fresh coat of cherry red with bicyclists like Present Day Brandon™. I blame the change on California and a life philosophy shaped by six months with The Truck.

The love of my life, Yvette.

In your savings clock, are you including the amount you spend on your various Home Improvement projects?

I'm not, and that may skew the numbers a little bit. That said, even the largest of my past and current Home Improvement projects hasn't cost me more than $100 (plus my time). I ignore smaller things like this in my calculation for simplicity, but also because it balances out other random costs of existing that my situation doesn't necessitate. For example, if I had an apartment, I'd likely be paying for some combination of water, electricity, and Internet, and I'd probably buy some food just so my refrigerator wasn't so lonely. At the end of it all, the savings clock is a very rough approximation, but rent and truck insurance are the dominating terms in the equation, and the rest is just noise.