Before I say anything else, let me be clear: this isn't me making up some spooky story, this actually happened to me this morning, Monday August 1st, at 6 am.

I had a series of strange dreams about spies and nuclear war last night. Pretty dramatic, but I have weird dreams all the time. The problem is that things got weirder after I woke up. First, I noticed a bitter taste in my mouth that I have no explanation for. I ate nothing strange last night and washed up using the same products I've been using for as long as I care to remember. That's not a big deal though. What is a big deal is this: 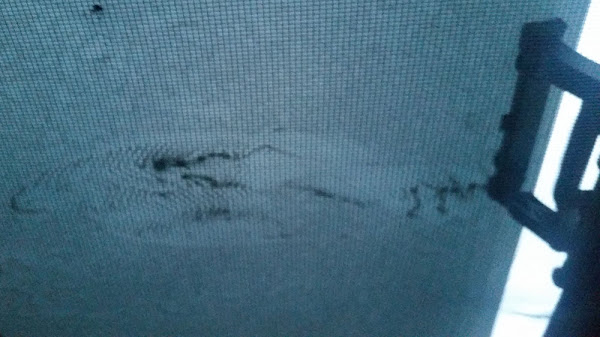 In case it's hard to tell, that's a muddied footprint on my sunroof, which I had installed a few months ago. Half-awake, I wanted to think it was literally anything else. Maybe a bird had dropped a fish or something and it had left that mark. Maybe it was just the imprint of a weird leaf. Highly unlikely (bordering on nonsensical), but I really desperately wanted to believe it wasn't a footprint. Unfortunately, I walked outside and proceeded to find this: 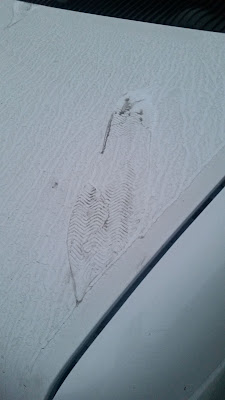 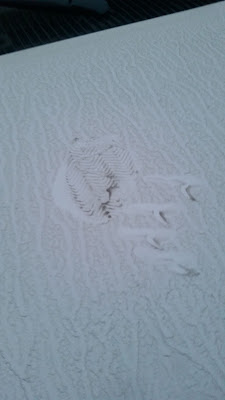 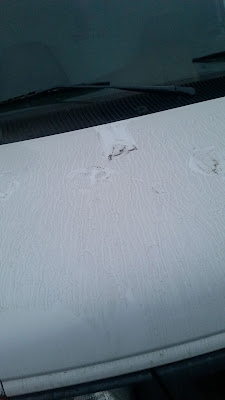 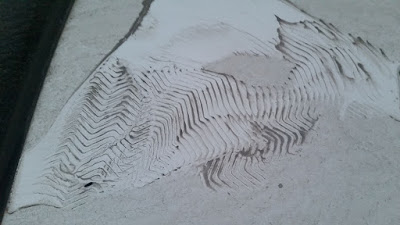 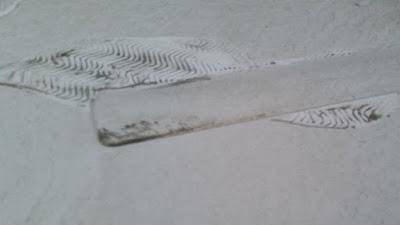 I took pictures like I was cataloging a damned crime scene, because I practically was.

Unfortunately, that confirms my fears pretty concretely. Someone left a trail of hand and footprints as they climbed their way onto the roof of the truck while I was sleeping last night. It's also pretty obvious that I desperately need to wash the truck, but I'm glad I didn't in this one specific instance, because if the truck was clean, the footprints wouldn't have been so visible.

I don't remember much out of the ordinary from last night. Sounds from cars leaving a nearby concert, maybe some kids hanging around and talking. The strangest thing I heard was a cop talking to someone and asking what they were doing. I don't know if the person was in a car or not, but the cop asked them for their license. They were slow to respond and seemed confused. I don't remember much else because I was half asleep, but I've never heard of cops hanging around this area, so it's pretty curious that they were there in the first place. While I was taking the above pictures, I noticed a man standing next to his car maybe 50 feet away. I asked him if he saw anything, but he didn't speak much English. I showed him the footprints on the truck and motioned to my feet to try to convey what had happened. He showed me the bottom of his shoes (which had a totally different pattern than the marks on the truck) and said he didn't know anything. Oh, and I checked all of my own shoes to see if the pattern matched, in case I had been sleep-walking or something (couldn't rule anything out). As expected, no match there either.

And that's all I have, leaving me with far more questions than answers. First and foremost:

How the hell did I not wake up? I didn't have ear plugs in and I'm a pretty light sleeper. Usually a person talking or a gust of wind is enough to stir me into something nearing consciousness. The movement of someone jumping onto the truck and walking directly above me should have woken me up, and the truck must have groaned and creaked loudly when they got onto the roof, which isn't meant to support anything nearing the weight of a person.

Why did they leave a footprint on the sunroof too? They couldn't have possibly stood on it, it's slippery, slanted, and has small plastic pieces that would have broken trying to support their weight. That means (barring any better explanations that escape me) they pressed their foot against the sunroof just to leave the print. If I hadn't seen that one, it's unlikely I'd have found the other footprints on the hood and cab.

And what were they even doing up there? Were they watching me sleep? Were they looking for something? I don't even know what they would have seen looking down into the truck. I was sleeping directly under the sunroof and I get the heebie-jeebies thinking about waking up in the middle of the night to see someone looking down at me. I'm not even sure if they'd be able to see me, there's no light in the truck and very little coming in from outside, most of which they'd be blocking with their body, plus the sunroof has a pretty heavy tint on it. Unless they had a flashlight, I don't know if they'd have seen much. I couldn't get any pictures of the roof, because I was unwilling to climb up there myself, but I did pull myself up so I could peek onto the roof. I didn't see any footprints towards the back, so they didn't walk around once they were up there. Maybe it was just some bored kid with a short attention span trying to get a better vantage point. Maybe they were looking for something to steal, and were trying to "case" the truck. If they were, I have bad news for them: I don't really have anything of value in there. In fact, if I came back to the truck to find every single thing missing, it'd hardly change my plans for the day.

I feel like I'm in the world's worst rendition of Cinderella, where the glass slipper has been replaced with a muddy sneaker print, and my Cinderella is a creepy dude who watches people in the middle of the night.